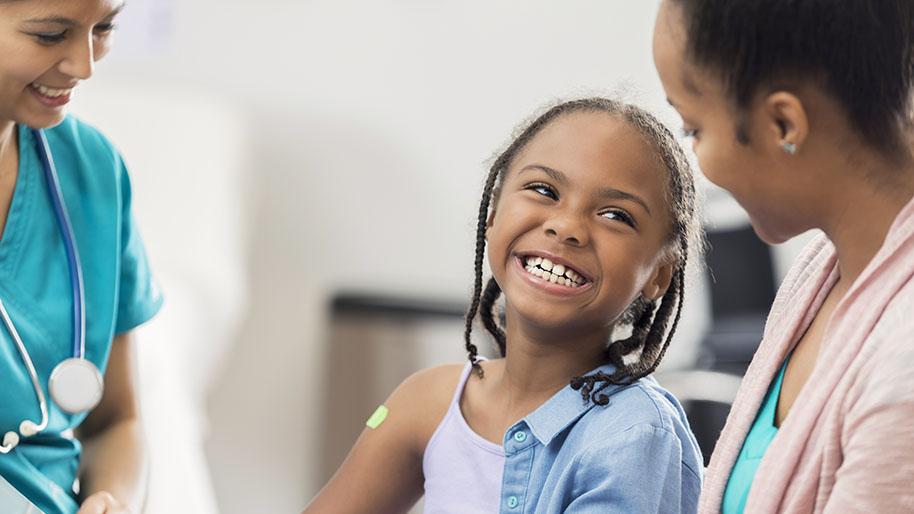 Vaccines protect against serious infectious diseases that can cause significant illness and even death. Routine childhood immunizations are a cornerstone of keeping your child healthy and are critical for public health as well.

How do vaccines work?

The first time the body encounters a germ, it takes time to make the antibodies to fight it. Once the body has made the antibodies, the immune system knows how to protect the body against that disease if exposed again in the future.

Vaccines work by introducing a tiny piece of a bacteria or virus to the body. The piece that is chosen is called an antigen and it is chosen specifically because it encourages a good immune response to occur. The body thus learns how to fight the disease without actually having the symptoms of the disease. Then, if the body is exposed to the actual disease, it will know how to fight it.

Vaccines are safe. Before being given to the general population, vaccines are extensively researched and studied to ensure they are effective and safe. By the time a vaccine is offered to the public, it has been studied for over 10 years, in tens of thousands of study participants, by thousands of scientists and health care providers. Vaccines also undergo continuous monitoring to reaffirm that they are safe and effective. Vaccines are far and away the most heavily tested and monitored type of medical product that we have, more than antibiotics or cancer drugs or other types of medical treatments.

Vaccines and side effects

Vaccines, like any medical intervention, can have some side effects. In general, the benefits of vaccines far outweigh the usually minor side effects. The most common side effects include local redness and swelling at the site where the shot was given. Fewer than 1/8 children will also experience temporary fevers after receiving vaccines. This occurs as their immune systems respond to the vaccine, creating the “memory” that will help protect from future exposure to the disease. These reactions are temporary, are not dangerous to children, and resolve on their own.

As with any medication or supplement, more serious side effects are possible but are very rare (less than one in a million doses). These side effects are listed on the CDC website and are available at every visit via the Vaccine Information Statement (VIS) that is provided for each vaccine.

Developmental delay, autism, and seizure disorders are not side effects of vaccines.

The false connection between vaccines and autism has caused a lot of parental concern. There have been a couple of different theories about this connection and both have been clearly disproven.

In February 1998, researchers in England published a paper that suggested a connection between vaccination and autism. Other scientists tried to do the same study to find similar results but were unable to replicate the findings. Since then, there have been 12 studies that showed that children who received MMR are NOT at greater risk of developing autism. In these 12 studies, over tens of thousands of children in many different countries were studied.

The initial study that suggested a connection is now known to be false. The paper that was published has been retracted from the journal in which it was printed. The author of the study, Andrew Wakefield, had his medical license revoked when it was discovered that he falsified his data. As a result, however, we see lingering concerns 20 years later about the vaccine and the rising rates of measles infection in Western Europe and North America as this false belief has not been eradicated from the Internet or parent forums.

Another publicized and discredited theory was that thimerosal (a mercury-based preservative) in vaccines was linked to an increase in autism rates. In 1999, the AAP and the U.S. Public Health Service sought to remove thimerosal from vaccines in case this was causing increased risk of autism. Six studies have since shown that thimerosal does NOT increase the risk of autism but many parents still worry that it is in vaccines. The type of mercury that has been associated with developmental delays is found in our air and water and its source is power plant emissions. Learn more about thimerosal in vaccines.

When vaccine skeptics realized these two theories had been fully debunked, they then began to claim that too many vaccines given too early increased risk of autism. Studies have again shown this does not affect the risk of autism.

When babies are in their mother’s womb, they are in a sterile environment. When the baby is born, they go from that sterile environment to a world that is full of bacteria and viruses. Immediately after birth, your baby is confronted by these bacteria and viruses, many of which live on our skin. As a reference, humans have about 100 trillion bacteria living on the surface of our bodies. Every time your baby puts their hand in their mouth, they are exposed to hundreds of thousands of germs.

In the first year of life, 14 vaccines are given. Among all 14 vaccines, there are a total of 160 antigens that your baby is exposed to. The 160 antigens collectively is a drop in the ocean compared to the hundreds of thousands of environmental challenges babies successfully navigate every day. This demonstrates how vaccines given on the recommended schedule will not overwhelm a baby’s immune system.

In general, the immune response to a natural infection is better than to a vaccine. However, when you are exposed to natural infection, the consequences can be much higher. Natural polio can cause paralysis and meningococcal infection causes meningitis, to name but a couple of potential risks. With vaccines, your baby gets the benefit of immunity without the risk of severe consequences of natural disease.

You may think “why should I immunize my baby? I had chicken pox and I was fine.” Unfortunately, we cannot predict the severity of the illness in each person. Often, chicken pox is just a rash and fever but it can lead to severe brain and lung infections.

Why does my child need to be vaccinated against diseases that we don’t see anymore?

The reason we don’t see many of these diseases anymore is because vaccines work so well! In some ways, vaccines are their “own worst enemy” because they are so effective. Before these vaccines were available, many infants, children, and adults routinely became very sick and often died from these diseases. In parts of the world where vaccines are not widely available, hundreds of thousands of young children still die every year from vaccine-preventable diseases.

In 2015 more than 130,000 people died from measles worldwide. The majority of the deaths were in infants and young children. As more parents refuse to vaccinate their children, we see the rates of serious and sometimes fatal diseases increasing in both the United States and Europe.

Are the ingredients in vaccines safe?

A full list of vaccine ingredients for each vaccine is available on the CDC website. Each vaccine contains an active ingredient, known as an “antigen,” which is the part of the vaccine that allows the body to create an immune response. Vaccines also contain “adjuvants,” which are substances put in the vaccines to make them work better and cause a stronger immune response. This allows for less vaccine or fewer doses to be needed.

In the United States, the three adjuvants used are:

These have all been studied extensively and found to be safe to give. While infants receive about 4.4 milligrams of aluminum from vaccines in the first 6 months of life, they receive much more than that in their diet. In the first 6 months of life, breast-fed infants ingest about 7 milligrams, formula-fed infants ingest about 38 milligrams, and infants who are fed soy formula ingest almost 117 milligrams of aluminum.

Vaccines also contain stabilizers, such as gelatin, that help them last during production and transport. Stabilizers may be the component of vaccines that are responsible for extremely rare allergic reactions but otherwise carry no side effects.

Vaccines contained in multi-dose vials are also made with preservatives. This is so the vaccines do not become contaminated. One preservative, thimerosal, became a topic of great controversy when it was proposed that it was the ingredient that might be linked to autism. However, this has been shown to be false. Despite the safety of thimerosal, in 1997, the decision was made to remove it from all childhood vaccines in the U.S. with the exception of multi-dose vials of the influenza vaccine.

Many parents who know that vaccines are safe and important sometimes wonder about “alternative schedules.” While this may seem like a reasonable compromise, it is important to understand that the vaccine schedule has been designed based on decades of research. This research is done in order to create the safest and most protective vaccination plan for children. The schedule is designed to provide protection to infants and children at the times when they are most susceptible to particular diseases, or more likely to have significant harm or death from that disease. In the first year of life, babies start to lose the protection from their mother’s antibodies that crossed through the placenta and were protective at birth. Babies have the weakest immune systems and are at the highest risk from serious complications and death from most vaccine-preventable diseases. This is why there are so many vaccines in the first year of life.

Delaying vaccines means more time to become exposed to the disease, which can come at a serious price. Chicken pox, for example, is often self-resolving but, before the introduction of the vaccine, 70 completely healthy American children died each year from chicken pox.

Another reason parents ask about alternative schedules is because the perceived stress on their baby when receiving multiple shots at one time. Studies show that children who receive several vaccines at the same time did not have any more stress, side effects, or complications than children who got only one shot at a time. In fact, spreading out vaccines was found to be more stressful for many infants and families. This is due to the fact that there are many more office visits and more distinct instances of the child having to get shots.

At Michigan Medicine, we are a pro-vaccine practice. We expect parents to immunize their children and strongly recommend following the standard vaccine schedule as developed and endorsed by the Advisory Committee on Immunization Practices (ACIP), the Centers for Disease Control and Prevention (CDC), the American Academy of Pediatrics (AAP), the American Academy of Family Physicians (AAFP), and the American College of Obstetrics and Gynecology (ACOG).

Children are as likely to be infected with COVID-19 as adults. By October of 2021, the CDC recorded more than 8,300 COVID-10 hospitalizations in children and 100 deaths. COVID-19 now ranks as one of the top 10 causes of death in children between the ages of 5 and 11. The COVID-19 vaccine should be given to all children older than 5-years-old. A booster can be given to children older than 12-years-old. Vaccines prevent from death and becoming very sick and needing to be in the hospital. Adults can also protect children less than 5-years-old by getting the COVID-19 vaccine. Some side effects include pain, redness and swelling in the arm where the vaccine was given. Other side effects include being tired, headaches, muscle pains, chills, fevers, or some nausea. These should resolve in a few days.