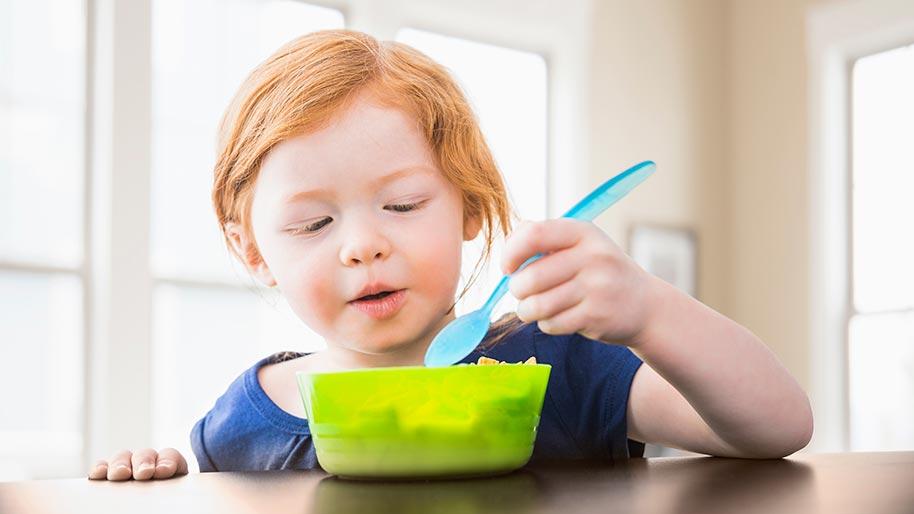 We all need iron to keep our bodies strong! Iron is an important part of hemoglobin, the part of red blood cells that carries oxygen from the lungs to the rest of the body. A child who is not getting enough iron can have learning or behavioral problems, since iron is important for energy, muscle function, and brain development.

How much iron does a child need?

The amount of iron that a child needs depends on their age:

What is iron deficiency anemia?

Anemia is a decrease in the amount of red blood cells, below the normal range for a certain age.

When the body does not get enough iron, it cannot make hemoglobin. Without enough hemoglobin, there are fewer red blood cells, so less oxygen reaches the cells and tissues that make up our bodies.

In developed countries, such as the United States, healthy babies typically get enough iron in their diet through breast milk or formula that is fortified with iron. When they begin to eat other complementary foods, they may not get enough iron, depending on the foods they are eating.

Cow’s milk actually makes it harder for the body to absorb iron. Toddlers can develop iron deficiency anemia if they drink too much cow’s milk (more than 24 ounces a day) and do not eat enough foods that are rich in iron such as green leafy vegetables and red meat.

Older kids who are picky eaters may not get enough iron as well, especially those who are on a vegetarian diet.

Iron deficiency anemia is more common in teenage girls than teenage boys because their bodies are not able to store as much iron, in addition to the loss of blood during menstruation.

In teenage boys, the rapid growth that is associated with puberty may lead to iron deficiency.

Symptoms of anemia in children

Over time, a child who is iron deficient will have symptoms of anemia if the deficiency is not corrected.  If a child is not getting enough iron, the amount of iron in the body will decrease, first affecting muscle and brain function since the body is using all of the available iron to make hemoglobin. When the level of iron continues to go down, the body will then make fewer red blood cells ultimately leading to anemia.

Some common symptoms associated with iron deficiency anemia include:

In rare cases when iron deficiency is very bad, a child may develop pica, which is a craving to eat items that are not food, such as dirt, paint chips, chalk, and ice.

How is iron deficiency anemia diagnosed?

The American Academy of Pediatrics recommends that all babies have a blood test done within the first year of life that screens for anemia, this usually happens around one year of age.

Some babies will have this done earlier than others, depending on risk factors for anemia, such as babies who are premature or babies who were considered very low birthweight.

In older children, a doctor may check a blood test depending on the symptoms that the child is having. They may also check a stool sample to make sure the child is not losing blood through their gastrointestinal tract.

The common blood tests that are used to check for iron deficiency anemia are hemoglobin, hematocrit or iron levels

How is iron deficiency anemia diagnosed?

Once a child is found to have iron deficiency anemia, he or she will typically require a daily iron supplement by mouth to increase the iron levels and hemoglobin back to the normal range.

If there is not a response to the initial treatment, it may be that the child is getting the wrong dose of iron or the body is not absorbing the iron correctly. In these cases, the doctor will want to check a repeat blood level and iron level and the child may need to see a pediatric hematologist who specializes in blood disorders.