For the first time, Mott will have its own unique float in the Thanksgiving Day Parade, and Mott teams are making sure they share the excitement with Little Victors.

ANN ARBOR, Mich. – Thanksgiving fun arrived at University of Michigan Health C.S. Mott Children’s Hospital today. The morning kicked off with the unveiling of a rendering of the new Mott float that will be debut in America’s Thanksgiving Parade presented by Gardner White in Detroit on Thursday. 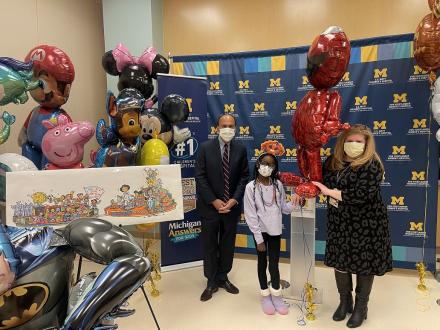 Following the unveiling, staff, nurses, physicians, the Ann Arbor Police and our Little Victor, Mackenzie paraded through the hospital hallways on the 12th floor. Patients and their families waved to the parade from their hospital rooms with clown noses, clappers, and beaded necklaces.

“It was wonderful to see Mott teams bring the magic of America’s Thanksgiving Parade presented by Gardner White to children at the hospital,” said Tony Michaels, president and CEO of The Parade Company. “We look forward to Mott’s beautiful float making its debut on Woodward Avenue on Thanksgiving morning.”

This year’s float is a celebration of Mott being ranked the No.1 hospital in Michigan by U.S. News & World Report in addition to being a thank you to all of the healthcare workers at the hospital.

The float will feature children at Mott known as “Little Victors” nurses, doctors, researchers, healthcare workers, and even the therapy dogs (with a special nod to the newest furry employees, Barney and Dashiel (Dash-ul)). The float will also Sophie’s Place, a new state-of-the-art recording studio and music therapy space that opened at to Mott this year.

“We are excited to debut our own float representing so many of the elements and people that make Mott such a special place,” said Luanne Thomas Ewald, FACHE, M.H.A., chief operating officer of Mott and Von Voigtlander Women’s Hospital. “It’s a way to express our gratitude for everyone who works so hard every day to take such wonderful care of the children at our hospital.”