Coronavirus (COVID-19) updates for parents and information about visitor restrictions at our hospitals and clinics.

Michigan Medicine C.S. Mott Children’s Hospital has been named a beneficiary of the North American International Auto Show (NAIAS) Charity Preview. Now in its 44th year, Charity Preview is considered the largest annual single-night fundraiser in the world.Charity Preview has raised more than $121 million for children’s charities in Southeast Michigan since 1976. 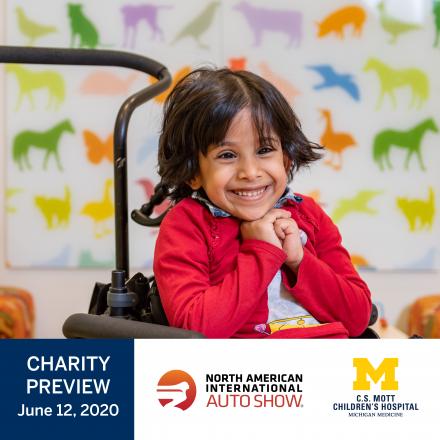 “For the first time ever, Mott Children’s Hospital has earned a spot as one of the nine charities benefiting from the North American International Auto Show Charity Preview in recognition of their commitment to excellence in improving the lives of children,” said Rod Alberts, executive director of the Detroit Auto Dealers Association North American International Auto Show.

Embracing NAIAS’ transformation with an evolution of its own, Charity Preview will be moving outdoors along the Detroit International Riverfront with warm summertime temperatures, more daylight hours, and an expanded auto show campus — including TCF Center and Hart Plaza.

“Local support is critical in aiding our ability to care for our young patients. Having the opportunity to engage with NAIAS Charity Preview — a nationally renowned event that truly reflects our mission — is an incredible opportunity for Mott,” said Chris Dickinson, M.D., chief clinical officer and interim executive director of C.S. Mott Children’s Hospital.

For the first time, a second ticketing option will be added. An outdoor-access ticket will be $200 each, all but $10 of which is tax deductible. This ticket will provide access to the NAIAS outdoor campus in Hart Plaza from 8-11:30 p.m.

The $754 million hospital, opened in 2011, is a 1.1 million square foot, 348-bed facility that is home to both C.S. Mott Children’s Hospital and Von Voigtlander Women’s Hospital. The hospital features a 12-story inpatient tower and nine-story clinical tower, a dedicated pediatric emergency department, and an on-site Ronald McDonald House. The hospital offers specialty services not offered anywhere else in Michigan for newborns, children, and pregnant women. To learn more about C.S. Mott Children’s Hospital, visit www.mottchildren.org.