ittle Victors had the chance to leave hospital rooms to meet a NASA astronaut. Col. R. Shane Kimbrough stopped by University of Michigan C.S. Mott Children’s Hospital to answer questions about space, take photos and sign autographs. The astronaut has completed two space missions, four spacewalks and has logged a total of 189 days in space.

Col. R. Shane Kimbrough stopped by University of Michigan C.S. Mott Children’s Hospital to talk about his space adventures, take photos and sign autographs for children being treated at the hospital.

The astronaut has completed two space missions and four spacewalks, logging a total of 189 days in space.

“This hospital is making such a difference to so many families and children every day. I knew it would be a special experience to be a part of this,” Kimbrough says.

“I hope to give the kids a little bit of hope and encouragement for whatever they want to do in their lives.”

Kimbrough answered some of Mott Little Victors’ top questions: Have you seen your house from space? Is it hard to walk after you land back on earth after a mission? What does it take to be an astronaut? What’s your favorite part of being in space? Did you see any aliens? 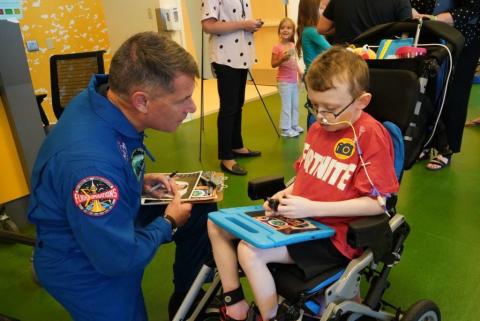 He encouraged those interested in space to pursue studies in STEM (Science, Technology, Engineering and Math) subjects.

The idea for the visit was inspired by conversations between the congenital heart program team at Mott and Kimbrough’s West Point classmate Bob Oehler, who is a Mott supporter.

“Many of us, at one point or another, have had that childhood fantasy of being an astronaut and going to space,” says pediatric cardiologist John Charpie, M.D., Ph.D., co-director of the congenital heart program at Mott who submitted the application for Kimbrough’s visit.

“So many children imagine what space is like and today our patients got to meet someone who has actually been there. We are grateful to Col. Kimbrough for giving Mott kids such an extraordinary, novel opportunity.”

Kimbrough was selected by NASA in 2004 and completed his first spaceflight in 2008 on STS-126, where he spent almost 16 days on the mission to expand the crew living quarters to accommodate a six-member crew. Kimbrough flew on the Expedition 49/50 mission where he performed four spacewalks.

Kimbrough spent other parts of the day touring Mott and the Congenital Heart Center and had a chance to meet with other members of the congenital heart program team.

Charpie said it was a unique professional development opportunity for faculty. Both the medical and space fields promote a culture of innovation and scientific discovery to improve outcomes.

“We are always looking for opportunities to engage influential leaders with unique professional accomplishments such as Col. Kimbrough to help us continue to improve our leadership skills in medicine,” Charpie says.

“There are many parallels between his experiences working with a highly functioning team on the International Space Station and coordination of complex, multidisciplinary care for our patients.  We were all looking forward to learning from his experiences.”

Kimbrough, a father of three, was joined by wife Robbie. Kimbrough’s hosts are Bob and Ann Oehlers of Maumee, Ohio. Bob is a 1989 West Point classmate of Col. Kimbrough, and also a teammate on the Army baseball team.