Failure to Launch: Parents are barriers to teen independence

National Poll: While most parents say they are doing enough to prepare their teen for adulthood, they gave low rankings of their teen’s ability to handle basic tasks.

ANN ARBOR, Mich. – Nearly all parents (97%) in a new national poll say they are helping their teen become more independent by using strategies like allowing them to make more choices (86%), pushing them to handle things themselves (74%) and no longer doing things for them (65%).

Despite this, one quarter of parents surveyed say they are the main barrier to their teen’s independence by not taking the time or effort to give their teen more responsibility, according to the C.S. Mott Children’s Hospital National Poll on Children’s Health at the University of Michigan.

“As children become teenagers, the role of parents shifts to helping them gain the knowledge and experience they will need for being independent adults,” says poll co-director Sarah Clark, M.P.H.

“This process of transitioning from childhood to adulthood includes everything from preparing for work and financial responsibility, to taking care of one’s health and well-being. Our poll suggests that parents aren’t letting go of the reins as often as they could be to help teens successfully make that transition.” 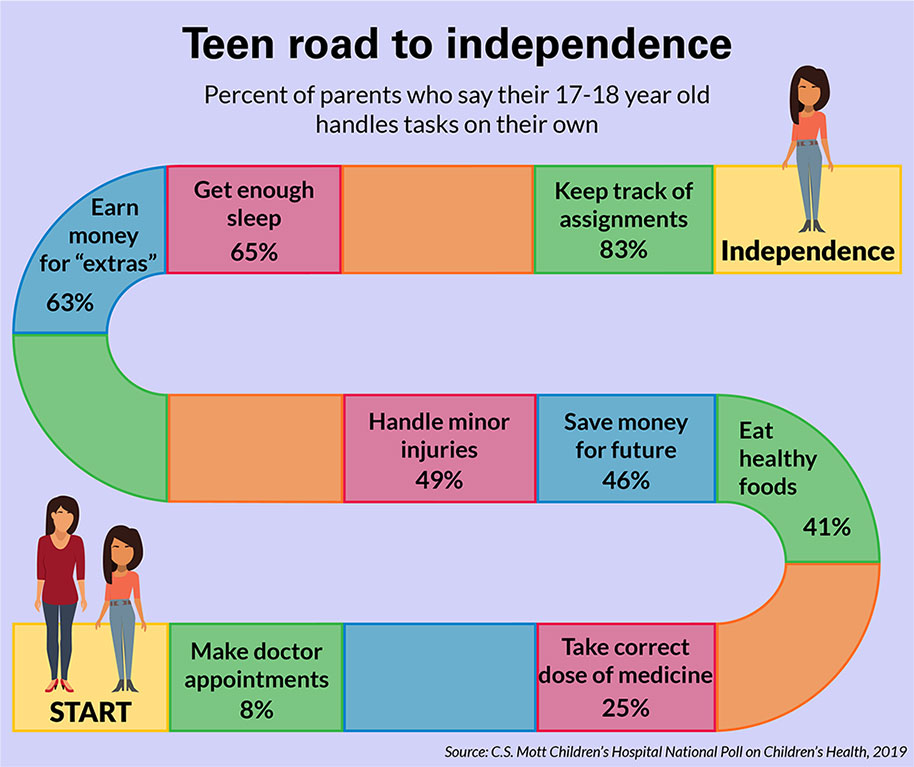 The report is based on responses from a nationally-representative sample of 877 parents of at least one child 14-18 years old.

Sixty percent of parents polled say their teen’s characteristics are barriers to becoming more independent, such as not being mature enough (24%), not having time (22%) or not knowing enough (14%) to take on more responsibility.

In contrast, one quarter of parents admit their own role in impeding their teen’s independence, saying it’s quicker and less hassle to do things themselves (19%) or they don’t think about how to give teens more responsibility (7%).

Parents gave the lowest rating of teen independence for tasks related to health care. When it comes to their teen’s health, parents may feel responsible for ensuring that appropriate care is received and medical advice is followed, Clark says.

“We did not ask about life-or-death health care matters. But we did ask parents whether their teens could independently handle very basic tasks, such as taking care of minor injuries, figuring out the correct dose of a medication or calling to make a doctor’s appointment,” says Clark.

“It is crucial for teens to begin taking ownership of their health before they enter adulthood when they will face more complex, adult tasks.”

“Parental over-involvement impedes teens from gaining experience and confidence to be independent in all aspects of their lives,” Clark adds.

Parents are nearly universal in the belief that it is important for teens to make mistakes, but they also feel they should prevent teens from mistakes that are too serious.

“It is clear that parents recognize tension in helping teens move toward independence, and they agree that valuable learning experiences often result from a poor decision,” Clark says.

Clark recommends parents to position themselves as a back-up resource, to be consulted only if the teen cannot handle the matter independently. Parents should also establish specific milestones and create opportunities to mentor their teens in gaining experience and confidence while reaching those goals.

“Some parents justify taking control over certain responsibilities because they don’t believe their teen is ‘mature enough.’ But this type of logic inhibits their teen from actually becoming more mature,” Clark says.

“Parents need to carve out more time for supporting teens in their transition to adulthood.”