Half of parents say their preschooler fears doctor’s visits

Fear of getting a shot most common reason parents say doctor’s visits scare their young child; 1 in 25 parents had postponed a vaccine due to child’s fear

ANN ARBOR, Mich. —  A trip to the pediatrician’s office can be a nerve-wracking experience for both children and their parents, especially when efforts to calm young patients down dominate the visit. 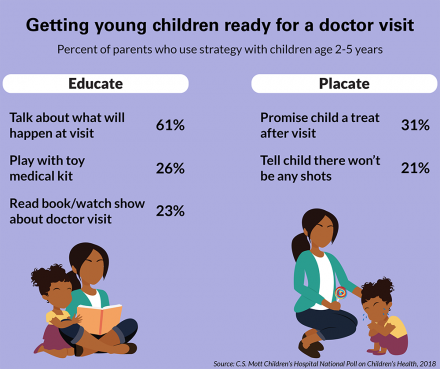 And half of parents of toddler and preschool-aged children can relate, saying their child is afraid of going to the doctor, according to a new report from C.S. Mott Children’s Hospital National Poll on Children’s Health at the University of Michigan.

One in 25 parents had postponed a vaccine due to their child’s fear of doctor visits and one in five parents said it was hard to concentrate on what the doctor or nurse was saying because their young child was so upset.

The nationally representative report is based on responses from 726 parents who had at least one child aged 2-5.

“Regular check-ups are vital during early childhood, not only because of important preventive services like vaccinations, but because they provide parents an opportunity to discuss health concerns with their pediatrician,” says Mott Poll co-director Sarah Clark.

“If a child fears the doctor’s office, health visits can be a challenging experience for the whole family. We found that children’s anxiety can negatively impact parents’ interactions with providers during visits and even causes a small proportion of families to postpone or cancel appointments.”

Levels of fearfulness did not differ based on whether the child saw the same doctor every visit or saw multiple providers, or whether it was the oldest child versus a younger sibling.

Children’s distress also interfered with parents’ ability to ask questions and share information with their provider. Twenty-two percent of parents say that it was hard to concentrate on what the doctor or nurse was saying, and 9 percent said they would sometimes not ask questions or bring up concerns, because their child was scared or upset during the visit. Four percent of parents reported delaying their child’s vaccination, and 3 percent cancelled a visit all together because of a child’s fear.

Parents used different strategies to help their children prepare for a doctor’s visit. Some parents tried to placate their young child by promising to get a treat after the visit (31 percent) or telling the child there wouldn’t be any shots (21 percent). About 1 in 5 parents (22 percent) said they didn’t do anything special to prepare their child for health care visits.

“Parents say the biggest source of fear is ‘needle phobia,’ which can be especially tricky for younger children who require vaccinations more frequently,” Clark says. “Children’s fear of shots can be exacerbated when they pick up on their parents’ anxiety and it can often be difficult to calm children down during these services.”

Clark recommends parents ask child health providers for tips on how to decrease children’s fear of shots. Having the child be held or hugged by the parent, for example, may be calming for many children. Distracting the child with songs, a video, or even coughing briefly before the shot, has also been shown to decrease anxiety.

“Telling the child there will no shots at the visit when the child is due for a vaccination or saying ‘it won’t hurt’ may backfire and only increase anxiety ahead of future visits,” Clark says.

Other parents tried educating their child about what would happen at the visit by talking about it (61 percent), playing with a toy medical kit (26 percent), or reading a book or watching a show about going to the doctor (23 percent).

“Steps to educate children ahead of a visit can help them develop expectations about what will happen so the interactions will feel familiar and alleviate fears,” Clark says.