Heading to the amusement park? 1 in 5 parents did not talk about what to do if kids got lost

National Poll: Nine out of 10 parents would report a ride operator suspected of being drunk or on drugs; less than half would report an operator using a cell phone

ANN ARBOR, Mich. — Parents headed to an amusement park or carnival with their kids this summer may be equipped with sunscreen and snacks but they should prepare for safety issues as well.  Emergency rooms saw 30,000 injuries linked to amusement parks and carnivals across the country in 2016, according to the U.S. Consumer Product Safety Commission. 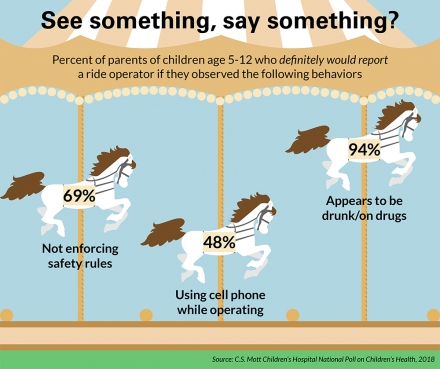 At the top of parents’ list: making sure their children know what to do if they get lost and that ride operators follow safety rules to reduce risks of injuries on rides.

One in 5 parents did not talk with their child about what to do if they got separated from them, according to this month’s C.S. Mott Children’s Hospital National Poll on Children’s Health at the University of Michigan. Parents also varied in their views about reporting unsafe ride operator behavior, with 9 in 10 saying they would definitely report suspicions that the operator was drunk or on drugs, while 69 percent would report failure to enforce safety rules, such as seat belts or height restrictions.

“As parents prepare for summer trips to the amusement park or local fair, they should keep safety at the top of mind,” says poll co-director Gary Freed, M.D. “As we’ve seen in news reports, accidents happen at amusement parks. Consequences range from skinned knees to serious injuries.”

“It’s also important to set clear expectations about what to do if children and parents get separated at such a large and crowded place,” Freed adds. “Our report indicates that this is only one of several opportunities to reduce safety risks for children in the amusement park environment.”

The report includes 1,214 responses from a nationally representative sample of parents of children ages 5-12.

Most parents (87 percent) believe that it is the responsibility of both parents and ride operators to make sure kids are safe on rides. Parents’ opinions varied in how often ride operators should undergo drug and alcohol testing, with nearly 6 in 10 (59 percent) preferring random testing. Another 13 percent were OK with weekly testing while 13 percent agreed with monthly and 3 percent with yearly testing. Eleven percent of parents thought checks should only be done if there were suspicions of drug or alcohol use.

Over two-thirds of parents would also report an operator that did not enforce safety regulations, such as minimum height restrictions and checking to see all restraints are properly secured, belts are buckled and that doors and safety bars are locked in place. Enforcement of minimum height restrictions help make sure restraints on rides fit properly so that they hold the child in place and to protect children from choking risks.

“Almost all parents we surveyed said both they and the ride operators have important roles in keeping their children safe. Understanding and following safety rules are important to prevent injuries, as is being aware of unsafe situations that increase risks,” Freed says.

“Parents varied in what specific concerns would prompt them to take action, with most parents saying they would report a ride operator who appeared to be drunk or under the influence of drugs,” Freed adds.

However, less than half of parents would report a ride operator for being on a cell phone while operating a ride.

“Even though cell phone use may seem less harmful, it poses a significant distraction that can increase the risk of accident or injury,” Freed says.

Almost all parents also reported they stayed with their child at all times during visits to amusement parks or carnivals, but Freed says it’s important to always have a back-up plan in case parents get separated from their child.

“Discussing safety rules, check-in times and meet-up locations should be part of pre-trip planning for families,” he says.