Poll: Social media makes it both easier and more challenging to parent tweens

Balancing freedom with supervision: 55 % of parents would read their tween’s texts, social media pages to learn more about a party; 39 % would track child’s location

ANN ARBOR, Mich. —   As children hit the “tween” stage between early elementary grades and the teenage years, parents may struggle balancing the need for independence with appropriate supervision, a new national poll suggests. 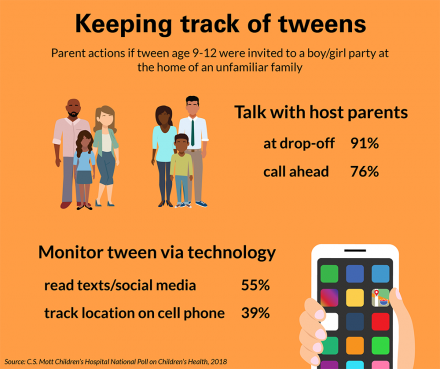 And modern technology has changed the ground rules. Nearly all parents of tweens ages 9-12 agree that social media makes it easier for kids to get in trouble. But 61 percent also felt that social media helps parents keep track of tweens, according to a new report from the C.S. Mott Children’s Hospital National Poll on Children’s Health at the University of Michigan.

“The tween stage brings new challenges for parents as they often must balance their child’s desire for more freedom and independence with supervision. It’s not an easy balancing act,” says poll co-director Sarah Clark.

The nationally representative poll is based on responses from 717 parents who had at least one child aged 9-12.

Fifty-five percent of parents would read their tween’s texts or social media pages to learn more information if their tween was invited to a boy-girl party at the home of an unfamiliar family, and 39 percent would track their tween’s location on their cell phone during the party. Mothers were more likely than fathers to say they would use technology to monitor their tweens.

“Social media has opened another door of questions about what parents should be keeping tabs on,” Clark says. “In some families, reading text messages or social media posts might be seen as ‘spying.’ But other parents discuss rules with their kids that include sharing passwords and setting the expectation that they will monitor social media interactions.

“Establishing family rules around the use of social media, and discussing the reasons for those rules, is an important part of parenting tweens.”

But the majority of parents still wanted to learn more information about what their kids were up to the traditional way, with 91 percent saying they would talk with a classmate’s parents when dropping their tween at a party if they didn’t know the family. Seventy-six percent would call ahead to make sure the classmate’s parents would be supervising the party.

Many polled acknowledged the push and pull between allowing children reasonable space while still monitoring their activities. Two-thirds of parents agreed that tweens need some freedom to make mistakes. Nearly half (46 percent) of parents rated themselves as stricter than the parents of their tween’s friends, while 45 percent rated themselves as about the same. Nine percent viewed themselves as less strict than others.

Clark says parents may consider giving tweens the opportunity to stay home alone, have greater ownership over schoolwork, and to socialize with friends without the immediate presence of their parents. These learning opportunities may differ from family to family, and likely will increase as children get older, she says.

“Unlike younger children who need adult supervision throughout the day, most tweens are able to spend periods of time without an adult present— but still don’t have the independence that many teenagers have,” Clarks says. “Parents must balance their responsibility to help their tween learn to be responsible and make good decisions, while ensuring their tween’s safety.”