Just 1 in 4 parents of driving age teens say their child is registered to be an organ donor. Major concerns among parents included inaccurate views on care and cost.

ANN ARBOR, Mich. —   Children in need of an organ transplant often wait longer than adults for available organs, as in many cases, they require organ donations from another child of a similar age or size. 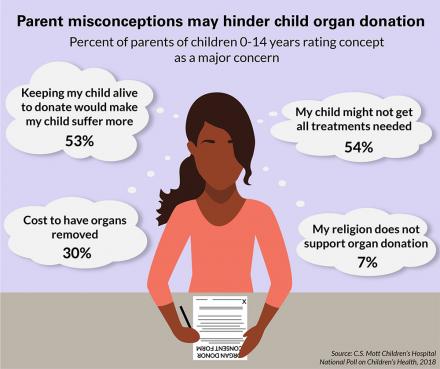 But organ donation among kids and teens is an understandably difficult topic to broach with parents. And parent misconceptions about child organ donation may further complicate the process, a new national poll finds.

Parents’ major concerns often included misunderstandings about medical care, potential suffering and cost related to child organ donation, according to this month’s C.S. Mott Children’s Hospital National Poll on Children’s Health at the University of Michigan. Only one in four parents polled say their driving age teen is registered to be an organ donor.

The report is based on responses from 2,005 parents with at least one child aged 0-18.

“We found that there are many misconceptions around child organ donation that may prevent parents from considering it,” says poll co-director Gary Freed, M.D., M.P.H.

“This isn’t a topic that’s typically discussed in schools or other platforms, so parents’ first introduction to child organ donation may potentially come at the most difficult moment of their lives,” Freed adds. “Not all hospitals may have personnel trained to have this type of discussion with grieving parents.”

Although teens are often able to register as organ donors when they get a driver’s license, just 24 percent of parents of teens ages 15-18 said their child had registered. While 49 percent of these parents said they would encourage their teen to register, 22 percent would not.

Fewer than half of parents of teens ages 15-18 also reported their teen had received information about being an organ donor.

“Teens of driving age are typically able to make a decision about whether or not to be an organ donor but are unlikely to receive much information about it up until that point,” Freed says. “This suggests that we need to do more to inform teens and their parents about organ donation.”

“It is important for parents to know that registering their child as an organ donor will not negatively affect medical care in any way, nor would their child experience any pain,” Freed says. “There is also never a cost to the donor’s family for organ donation.”

Parents also recognized major benefits of having their child registered as an organ donor, including having their preferences known in advance (51 percent), having an opportunity for their child to help other children (70 percent), and increasing the number of child-sized organs for transplant (67 percent).

More than 2,000 U.S. children are on an organ transplant waiting list for kidneys, livers, hearts, lungs and other organs, according to the federal Organ Procurement and Transplantation Network.

“Parents polled recognized that child organ donation helps save the lives of other children. Of course no parent wants to think about the possibility of facing this kind of decision,” Freed says.

“This poll suggests that we may benefit from a national, organized mechanism for parents to gain information regarding organ donation and to expand the structure for donor registration to younger ages.”