Back-to-school worries for parents? 1 in 3 very concerned bullying, cyberbullying will impact their kids

ANN ARBOR, Mich. —  Parents may also experience some nerves as their children prepare to head back to school. 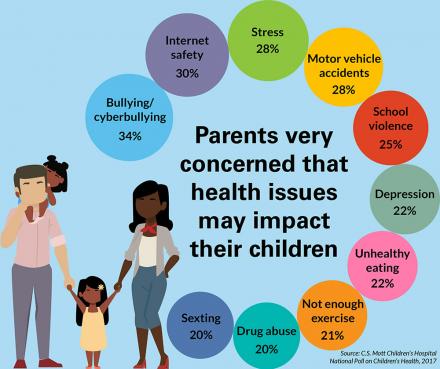 Bullying and cyberbullying top parents’ list of worries when it comes to their children’s health, according to a new report from the C.S. Mott Children’s Hospital National Poll on Children’s Health at the University of Michigan. Close behind are internet safety and stress, motor vehicle accidents, and school violence.

But worries differed among racial groups, with African-American parents saying they were most concerned about racial inequities and school violence affecting their children.

The report is based on responses from 2,051 adults – including 1,505 parents of children ages 0-18– from a nationally representative household survey.

“Adults across the country recognized bullying, including cyberbullying, as the leading health problem for U.S. children,” says Gary Freed, M.D., M.P.H., a Mott professor of pediatrics and the poll’s co-director.

This is the eleventh year the Mott Poll has surveyed a national sample of adults on the top 10 health concerns rated as a “big problem” for children and teens. For the first time, this year parents were also asked to rate health concerns for their own children.

“When it came to their own kids, parents’ biggest child health concerns depended on their children’s ages,” Freed says. “For example, for parents of children ages 0-5, cancer was rated as a top health concern even though pediatric cancer is quite rare. Parents may have concerns about very serious conditions despite the small risk for them.”

As more children have access to the internet and social media, many parents also expressed concerns about their children’s safety online. Experts have raised concerns about how cyberbullying may impact children’s mental health, with anxiety, depression and even suicide being linked to this type of harassment. Vulnerability to online predators is also a risk.

“Parents should regularly discuss internet safety with their children and teens and ways to prevent problems,” Freed says. “Simple effective strategies may include not providing personal identifying information on social media, chat platforms, or in shared gaming environments.”

Motor vehicle accidents – which are the leading cause of death for children age 2-14 – were also of great concern to all groups of parents. In 2015, more than 650 children died and more than 120,000 were injured in crashes.

See the full report on the Mott poll website.