COVID-19 Vaccines: Information about COVID-19 vaccines and how we're preparing for distribution.

Most U.S. adults say today's children have worse health than in past generations

ANN ARBOR, Mich. — More than half of adults believe children today are more stressed, experience less quality family time and have worse mental and emotional health than children in past generations, according to the C.S. Mott Children’s Hospital National Poll on Children’s Health. 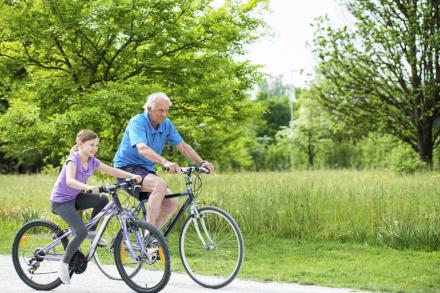 “We have seen major advances in medicine and public health over the last century that have greatly reduced children’s illness and death. On the other hand, conditions like childhood obesity, asthma and behavior problems have become more common,” said Matthew M. Davis, M.D., M.A.P.P., director of the poll and professor of pediatrics and internal medicine at the University of Michigan’s C.S. Mott Children’s Hospital.

Among the key results, 55 percent of adults polled believe kids’ mental and emotional health is worse today than when they were children. Coping and personal friendships for children were also widely viewed as worse than for children in the past.

“The dominant view from this poll is that children’s health is worse today than it was for generations past, and we need to more urgently address these challenges,” said Mark Wietecha, CEO and president of Children’s Hospital Association, which collaborated on the poll. 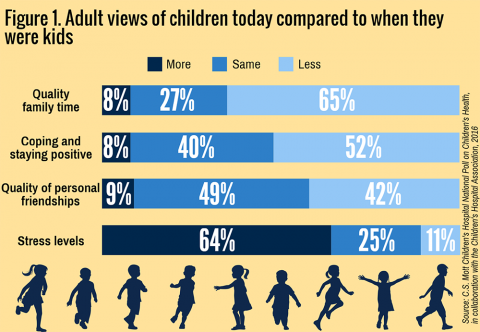 The poll of nearly 2,700 adults in a nationally representative sample asked respondents to assess key variables for children growing up today, compared to those in prior decades. The findings linked to behavioral health are consistent with previous Mott polls that cited bullying, stress, suicide, and depression as leading child health concerns identified by adults across the U.S.

Data Source: The survey was administered in January 2016 to randomly selected, stratified groups of adults age 18 and older (n=2,648), using mixed modes (web-based and telephone) to encourage participation by potential respondents with different mode preferences. Adults were selected from GfK’s web-enabled KnowledgePanel® and from NORC’s AmeriSpeak® panel that both closely resemble the U.S. population. These sub-samples were subsequently weighted to reflect population figures from the Census Bureau and were then combined to serve as a unified analytic sample. The survey average completion rate was 53% among panel members contacted to participate. The margin of error is ± 1 to 5 percentage points.