Coronavirus (COVID-19) updates for parents and information about visitor restrictions at our hospitals and clinics.

A younger sibling may be good for your child’s health

ANN ARBOR, Mich. —  Becoming a big brother or big sister before first grade may lower a child’s risk of becoming obese, a new study led by the University of Michigan suggests. 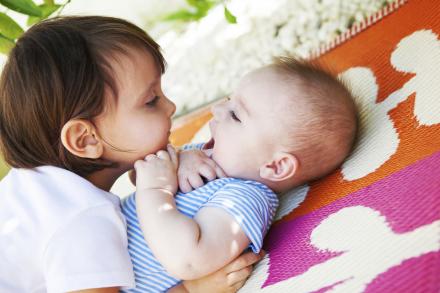 The birth of a sibling, especially when the child was between about two and four years old, was associated with a healthier body mass index (BMI) by first grade, according to the research. Children the same age who didn’t have a sibling were nearly three times more likely to be obese by first grade.

The findings, which included 697 children across the U.S., appear in the April 2016 issue of Pediatrics.

“Research suggests that having younger siblings – compared with having older or no siblings – is associated with a lower risk of being overweight. However, we have very little information about how the birth of a sibling may shape obesity risk during childhood,” says senior author Julie Lumeng, M.D., a developmental and behavioral pediatrician at U-M’s C.S. Mott Children’s Hospital.

“This study is believed to be the first to track subsequent increases in BMI after a child becomes a big brother or sister.”

One possible explanation, the authors speculate, could be that parents may change the way they feed their child once a new sibling is born. With children developing long-lasting eating habits at around three years old, changing dietary habits may have a significant impact.

Authors also note that children may engage in more ‘active play’ or less sedentary time in front of screens once a younger sibling is born, contributing to healthier BMIs.

“We need to further study how having a sibling may impact even subtle changes such as mealtime behaviors and physical activity,” says Lumeng, who is also with U-M’s School of Public Health and Center for Human Growth and Development.

“Childhood obesity rates continue to be a great cause of concern. If the birth of a sibling changes behaviors within a family in ways that protect against obesity, these may be patterns other families can try to create in their own homes. Better understanding the potential connection between a sibling and weight may help health providers and families create new strategies for helping children grow up healthy.”