Are parents of ‘difficult’ children more likely to use iPads to calm kids down?

ANN ARBOR, Mich. — It may be tempting to hand an iPad or Smartphone to a tantrum-throwing child – and maybe more so for some parents.

Children with social and emotional difficulties in low income homes were more likely to be given mobile technology to calm them down or keep peace and quiet in the house, according to a small study led by a pediatrician at C.S. Mott Children’s Hospital at the University of Michigan. 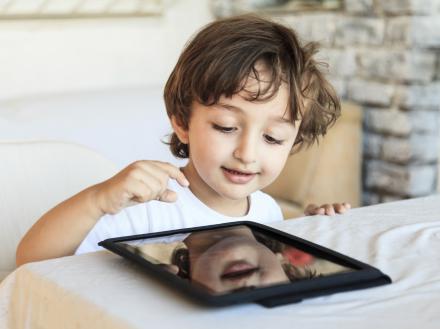 The findings appear in a research letter in today’s JAMA Pediatrics.

"We know that parents of babies and toddlers with difficult behavior disproportionately use television and videos as calming tools. We wanted to explore whether the same might be true for mobile technology like phones and tablets,” says lead author Jenny Radesky, M.D., a child behavior expert and assistant professor in pediatrics at U-M’s C.S. Mott Children’s Hospital. Radesky conducted the study while at Boston Medical Center.

“We found that the less control and more frustration parents felt over their children’s behavior, the more likely they were to turn to mobile devices to help calm their kids down. We need to further study whether this relationship between digital technology and social-emotional development difficulties applies to a more general population of parents as well, and what effect it might have on kids’ longer-term outcomes.”

The study included 144 healthy children ages 15-36 months in low income families. Parents were asked about the likelihood of allowing Smartphone or tablet use during different situations.

Devices were more likely to be used as a coping strategy to pacify children with difficult behavior. However, there were no differences between children with social-emotional difficulties and other children when it came to mobile technology use during other scenarios, such as eating, being in public, doing chores or at bedtime.

“Now that screens can be taken anywhere, they have become part of our interpersonal space.  We’re interested in identifying the ways that mobile devices sometimes interfere with family dynamics, but also how we can use them as a tool to increase parent-child connection.”