Helicopter parenting at the doctor’s office may impact teen health 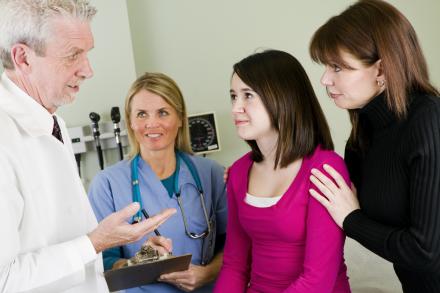 ANN ARBOR, Mich. —   Parents of teens may struggle letting go of the reins when it comes to their children’s health checkups, a new national poll suggests.

Just 34 percent of parents say their teen discussed health concerns privately with a doctor without them in the room, and less than 10 percent say their teens can complete their health history form independently.

Today’s report from the C.S. Mott Children’s Hospital National Poll on Children’s Health at the University of Michigan includes a nationally-representative group of parents of teens ages 13-18.

“The majority of parents are managing teens’ health care visits, and their teens may be missing out on valuable opportunities to learn how to take ownership of their own health,” says Sarah J. Clark, M.P.H., associate director of the C.S. Mott Children’s Hospital National Poll on Children’s Health.

“Having teens take the lead in responsibilities like filling out their own paperwork, describing their health problems, and asking questions during adolescence helps them gain experience and confidence in managing their health. Speaking with the doctor privately is important, not only to give teens a chance to disclose confidential information, but also to provide the opportunity for them to be an active participant in their own health care, without a parent taking over.” 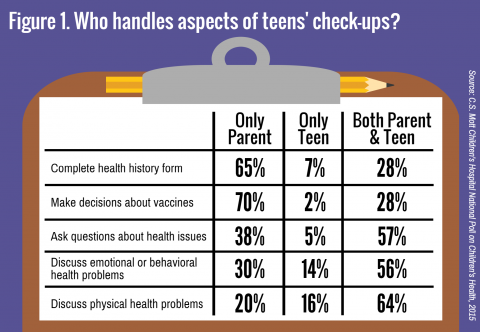 “Parents’ top reason for handling different aspects of the health care visit is that their teen would not be comfortable talking about these subjects – which may stem from the fact that they aren’t getting much practice,” says Clark

“Parents are naturally concerned about their child’s health and that transition to letting their teens become independent in the health setting can be difficult,” Clark adds. “But with parents’ guidance, these early opportunities will help teens prepare to navigate the health care system and take responsibility for their own health as they get older.”

Ways to help your child become independent at health visits:

Data Source: This report presents findings from a nationally representative household survey conducted exclusively by GfK Custom Research, LLC (GfK), for C.S. Mott Children’s Hospital via a method used in many published studies.The survey was administered in September 2015 to a randomly selected, stratified group of parents age 18 and older with at least one child age 13-18 (n=1,517). Parents were selected from GfK’s web-enabled KnowledgePanel® that closely resembles the U.S. population. The sample was subsequently weighted to reflect population figures from the Census Bureau. The survey completion rate was 40% among panel members contacted to participate. The margin of error is ± 1 to 4 percentage points.