COVID-19 Vaccines: Information about COVID-19 vaccines and how we're preparing for distribution. 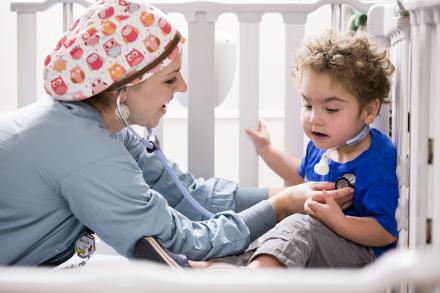 ANN ARBOR, Mich. — Kaiba was just a newborn when he turned blue because his little lungs weren’t getting the oxygen they needed. Garrett spent the first year of his life in hospital beds tethered to a ventilator, being fed through his veins because his body was too sick to absorb food. Baby Ian’s heart stopped before he was even six months old.

Three babies all had the same life-threatening condition: a terminal form of tracheobronchomalacia, which causes the windpipe to periodically collapse and prevents normal breathing. There was no cure and life-expectancies were grim.

The three boys became the first in the world to benefit from groundbreaking 3D printed devices that helped keep their airways open, restored their breathing and saved their lives at the University of Michigan’s C.S. Mott Children’s Hospital. Researchers have closely followed their cases to see how well the bioresorable splints implanted in all three patients have worked, publishing the promising results in today’s issue of Science Translational Medicine.

“These cases broke new ground for us because we were able to use 3D printing to design a device that successfully restored patients’ breathing through a procedure that had never been done before,” says senior author Glenn Green, M.D., associate professor of pediatric otolaryngology at C.S. Mott Children’s Hospital.

“Before this procedure, babies with severe tracheobronchomalacia had little chance of surviving. Today, our first patient Kaiba is an active, healthy 3-year-old in preschool with a bright future. The device worked better than we could have ever imagined. We have been able to successfully replicate this procedure and have been watching patients closely to see whether the device is doing what it was intended to do. We found that this treatment continues to prove to be a promising option for children facing this life-threatening condition that has no cure.” 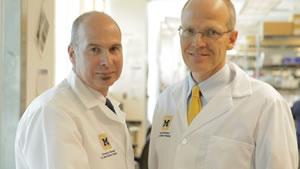 The findings reported today suggest that early treatment of tracheobronchomalacia may prevent complications of conventional treatment such as a tracheostomy, prolonged hospitalization, mechanical ventilation, cardiac and respiratory arrest, food malabsorption and discomfort. None of the devices, which were implanted in then 3-month-old Kaiba, 5-month-old Ian and 16-month-old Garrett have caused any complications.

The findings also show that the patients were able to come off of ventilators and no longer needed paralytics, narcotics and sedation.  Researchers noted improvements in multiple organ systems.  Patients were relieved of immunodeficiency-causing proteins that prevented them from absorbing food so that they no longer needed intravenous therapy. 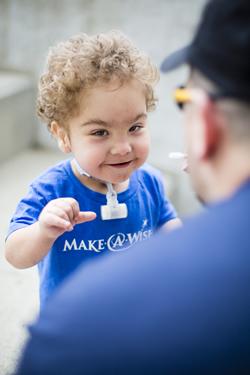 Kaiba Gionfriddo made national headlines after he became the first patient to benefit from the procedure in 2012, and the procedure was repeated with Garrett Peterson and Ian Orbich. Using 3D printing, Green and his colleague Scott Hollister, Ph.D., professor of biomedical engineering and mechanical engineering and associate professor of surgery at U-M, were able to create and implant customized tracheal splints for each patient. The device was created directly from CT scans of their tracheas, integrating an image-based computer model with laser-based 3D printing to produce the splint.

The specially- designed splints were placed in the three patients at C.S. Mott Children’s Hospital. The splint was sewn around their airways to expand the trachea and bronchus and give it a skeleton to aid proper growth. The splint is designed to be reabsorbed by the body over time. The growth of the airways were followed with CT and MRI scans, and the device was shown to open up to allow airway growth for all three patients.

Doctors received emergency clearance from the FDA to do the procedures.

“We were pleased to find that all of our cases so far have proven to improve these patients’ lives,” Green says. “The potential of 3D-printed medical devices to improve outcomes for patients is clear, but we need more data to implement this procedure in medical practice.” 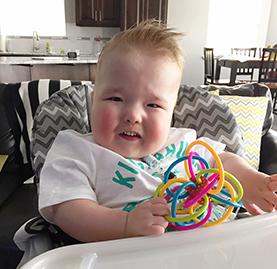 Authors say the recent report was not designed for device safety and that rare potential complications of the therapy may not yet be evident. However, Richard G. Ohye, M.D., head of pediatric cardiovascular surgery at C.S. Mott who performed the surgeries, says the cases provide the groundwork to potentially explore a clinical trial that could help other children with less-severe forms of tracheobronchomalacia in the future.

Kaiba, now a curious, active 3-year-old who loves playing with his siblings and who recently saw his favorite character Mickey Mouse at Disney World thanks to the Make-a-Wish Foundation, was back at Mott in April for a follow-up appointment.

The splint is dissolving just how it’s supposed to and doctors expect that eventually, his trachea will reflect that of his peers with no signs of the tracheobronchomalacia that nearly killed him as a newborn.

“The first time he was hospitalized, doctors told us he may not make it out,” Kaiba’s mom April Gionfriddo remembers. “It was scary knowing he was the first child to ever have this procedure, but it was our only choice and it saved his life.” 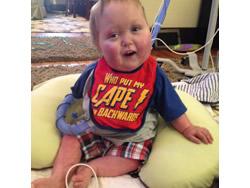 Now an energetic 2-and-a-half-year-old with a contagious laugh, Garrett is able to breathe on his own and spend his days ventilator-free. Ian, now 17 months old, is known for his huge grins, enthusiastic high fives and love for playing with his big brother, Owen. Ian had the splint procedure done at Mott exactly one year ago this month.

“We were honestly terrified, just hoping that we were making the right decision,” his mother Meghan Orbich remembers. “I am thankful every single day that this splint was developed.  It has meant our son’s life.  I am certain that if we hadn't had the opportunity to bring Ian to Mott, he would not be here with us today.”

Disclosure: Hollister and Green have filed a patent application related to the device.