What is small bowel obstruction?

There are also two classifications of blockage: 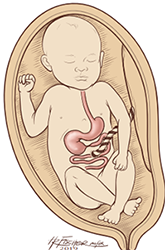 The cause of DA/DS is unknown but, in nearly a third of cases (30%), they are associated with trisomy 21 (Down syndrome).  Also, an annular pancreas, when extra pancreatic tissue surrounds and compresses the duodenum, can cause atresia or stenosis.  Duodenal atresia (DA) is a complete blockage in the first part of the small intestine while duodenal stenosis (DS) is a narrowing (or partial obstruction) in the same area.  Both conditions are rare, occurring in 1 in every 10,000 births; however, they are a leading cause of intestinal obstruction in newborns.

The cause of jejunileal atresia is thought to be due to a disruption of blood flow to the intestines during development.

DA/DS is usually diagnosed after 24 weeks’ gestation when there is increased fluid in the uterus (polyhydramnios) and a “double bubble” (dilated fluid-filled stomach and duodenum) appears in an ultrasound. Several ultrasounds may be required to make the diagnosis.

The ultrasound findings will also trigger further testing for Down syndrome as 30% of cases with DA/DS will have trisomy 21.  It is recommended to remove fluid from the uterus for testing (amniocentesis) given the high incidence of chromosomal abnormalities.

Another 30% of cases are associated with congenital heart disease, in which a fetal echocardiogram will also be performed.

There are other intestinal malformations that can give rise to a “double bubble” and these will be investigated during the prenatal evaluation.  These findings may not be present during the screening ultrasound and, as a result, be diagnosed after birth.

Jejunal atresia may be visualized on prenatal ultrasound evaluation based on the presence of a few dilated (widened) loops of bowel and increased fluid in the uterus (polyhydramnios).

In ileal atresia, many dilated (widened) thickened loops may be seen which may also appear bright on an ultrasound (echogenic).  Typically, increased fluid in the uterus is not seen in ileal atresia. Seeing the bowel actively moving increases the odds for an obstruction.

Since cystic fibrosis may be present in up to 10% of cases, further testing is recommended.

Jejunoileal stenosis, which is less common compared to atresia, may be difficult to diagnose before birth.

There are currently no fetal interventions offered for these small bowel obstructions.  With early detection, however, our team can counsel families prenatally and prepare them for postnatal intervention.

Cases associated with an excessive amount of amniotic fluid (polyhydramnios) can contribute to preterm labor which will be managed by the Fetal Diagnosis and Treatment Center (FDTC).

If echogenic bowel (when an infant’s bowel appears brighter than normal in an ultrasound) is detected, it raises the suspicion for cystic fibrosis and further testing is recommended.

Since a baby with small bowel obstruction may have other anomalies present at birth, a variety of tests will be conducted for a full assessment, including:

In the case of DA/DS, an echocardiogram will also be performed to evaluate for congenital heart disease.

Specific methods used to diagnose DA/DS after birth include an abdominal x-ray showing the classic “double bubble” sign which would indicate a DA.  If there is gas seen in the intestine beyond the “double bubble,” there can be duodenal stenosis or another intestinal abnormality.  Sometimes a contrast x-ray study is obtained to aid in the diagnosis.

Within the first couple days of life, the baby will undergo surgery for definitive repair (sewing the two ends of the intestine together after excluding additional blockages) by our pediatric surgery team.  At Michigan Medicine, this operation can often be performed with minimally invasive techniques resulting in a few tiny incisions and excellent results.

With jejunoileal atresia, after a careful search for an additional blockage, the ends of the intestine are sewed together.  Overall, the outcome for isolated jejunoileal atresia is excellent.  However, in rare cases, there is loss of small bowel which may lead to “short bowel syndrome,” complicating recovery.

Take the Next Step