Lung malformations, including congenital pulmonary airway malformations (CPAM, formerly called CCAM) and bronchopulmonary sequestration (BPS), are uncommon disorders that can cause a wide range of problems, including breathing difficulties, recurrent infection, and more rarely, cancer.  The physicians at C.S. Mott Children’s Hospital are leaders in the management of lung malformations and are one of the most experienced lung lesion teams in the Midwest.

C.S. Mott Children’s Hospital is home to one of the nation’s most comprehensive Fetal Diagnosis and Treatment Centers. Our team members are recognized leaders in the management of lung malformations. We provide fetal diagnosis and counseling, individualized delivery planning, and fetal intervention when necessary.  Our pediatric surgical team also provides post-natal treatment and long term follow up for children diagnosed with lung malformations.

What is a lung malformation? 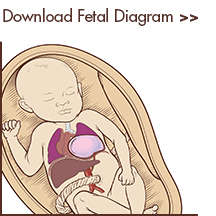 A lung malformation is a mass of disorganized lung tissue that forms as the lungs of the fetus develop in the womb.  The mass, or lesion, usually involves only one of the lobes of the lung.  There is no known cause.

In the past, these malformations have been classified into two main types.  One is called a congenital cystic adenomatoid malformation or CCAM.  More recently, CCAMs are also referred to by another name, CPAM, which stands for congenital pulmonary airway malformation.  These lesions can consist of many tiny cysts (microcystic), or fewer large cysts (macrocystic), or a combination of both.  Although most of these lesions stop growing around the 26th week of gestation, some continue to grow so patients’ need to be monitored closely.

The other type of lung lesion is called a bronchopulmonary sequestration, or BPS.  This type of mass has an abnormal blood vessel that enters the mass directly from the aorta.  Sometimes, there is too much blood flow to this abnormal lung and this may cause fetal heart failure.

There are other lung malformations with some differences.  These may be a combination of the CPAM or BPS, called a hybrid lesion.  There are also bronchogenic cysts, bronchial atresia, and congenital lobar emphysema.  No matter the type, most are evaluated and managed in a similar way during fetal life.

Diagnosis of a lung malformation

Ultrasound is the primary tool used to assess the baby.  A special measurement called the CVR (CCAM-volume-ratio) is done with the ultrasound.  It is used to help predict which babies are more likely to have problems during pregnancy.  The measurement can be used for both CPAMs and BPS lesions.  The ultrasound is also used to measure blood flow through certain blood vessels.  This is called color-flow Doppler and it is used to look for a feeding vessel from the aorta.

In some babies with a large lesion, a fetal MRI may be used to better define the lesion and measure the lung volumes.  A fetal echocardiogram (special heart ultrasound) is used to assess how well the heart is working when there is a concern.  Babies with lung lesions usually have normal chromosomes.  An amniocentesis is only recommended when other problems are present.

Occasionally, lung malformations are found after birth by x-rays or CT scans when patients are evaluated for breathing problems or recurrent lung infections.

Management of the pregnancy

Prenatal ultrasounds are used to monitor the size of the lesion, and to check fetal well-being.  Additional antenatal testing may be used depending on maternal and fetal factors.  More than 90 percent of babies with prenatally diagnosed lung lesions will not have any fetal problems.

Close monitoring is important to ensure the fetus does not develop heart failure which is called hydrops.  This is when fluid collects within the skins and around the heart, lungs and intestines of the baby.  These very sick babies have a large lesion as measured by the CVR.

Some large lesions can compress the esophagus, impair swallowing, and lead to increased fluid levels around the baby which is called polyhydramnios.  The increased fluid in the uterus can  cause preterm labor.

We are one of a few centers in the country that can provide the full range of fetal interventions to improve the outcome of your baby.

Delivery of babies with lung lesions

The final delivery plan for babies with a lung malformation should be addressed at a specialized center with experience in the natural history of these lesions.  Larger malformations (CVR>1.0) have an increased risk of respiratory problems at birth and the need for surgical removal in the newborn period.

Delivery at the University of Michigan is recommended close to your delivery date.  The University of Michigan is one of only a few centers nationwide at which the birth center is co-located within a comprehensive, free-standing children’s hospital.  This unique setting allows for seamless integration between our private-room birth center, state-of-the-art newborn intensive care unit (NICU), and access to around-the-clock pediatric surgical services in one convenient location.

Lesions that are smaller (CVR<1.0) are less likely to cause problems at birth.  You may have the option to delivery closer to home if that is your preference.  Small lung lesions are at low risk of causing any breathing problems or needing lung surgery within the first few weeks of life.

Unless there is a special birth plan, a vaginal delivery is recommended.  A cesarean section is reserved solely for obstetrical indications.

Treatment of lung malformations after birth

These malformations should be removed on an elective basis before complications occur.  After the baby is born, you will meet with one of our pediatric surgeons to review how your baby is doing and make plans to remove the malformation.  Follow-up with one of our pediatric surgeons is recommended around 3 months of age.  A CT scan is scheduled before the visit with the surgeon to better define the lesion and help with surgical planning.

For babies who have breathing problems, the lesion needs to be excised urgently through a chest incision on the affected side of the baby.  In newborn babies with very large lesions causing pulmonary hypoplasia and pulmonary hypertension, supplemental oxygen, mechanical ventilation, or ECMO support may also be required until the remaining lungs recover.  Because some of these children will have chronic lung disease, they are followed long-term in our newly established Aerodigestive Clinic, a multidisciplinary effort that includes specialists from pediatric surgery, pulmonary, and otolaryngology.

Fortunately, most lung malformations do not cause breathing problems during the first several months of life.  Even though most lung malformations cause no symptoms during early infancy, they should be surgically removed in most cases to avoid future, potentially life-threatening complications.  The most common complication is recurrent infection (pneumonia), which can be difficult to treat with antibiotics and can result in prolonged hospital stays.  Although quite rare, it is also well known that malignant transformation (cancer) can occur within lung malformations that are not removed.  Once cancer develops, the problem becomes more difficult to treat and may require other treatments such as chemotherapy.

If lung surgery is recommended, this is typically performed between 3 and 6 months of age.  In these cases, we obtain a chest x-ray as a baseline study until a high-resolution CT scan of the chest can be performed to fully characterize the lung lesion.  A brief period of general anesthesia during the study is usually required.  Immediately following the study, you will see one of our pediatric surgeons in clinic so that a formal recommendation can be made regarding the need to remove the lung malformation.

Since 2006, our pediatric surgeons have been removing lung malformations on a routine basis using state-of-the-art, minimally invasive surgery techniques.  To date, about 90% of asymptomatic lung malformations have been successfully removed in this fashion with excellent outcomes.  Instead of traditional methods that require a large chest incision with spreading of the ribs to perform the operation, our surgeons generally use minimally invasive surgical techniques requiring only three or four tiny incisions (each about the width of an eraser head).  The surgeon then uses a thin telescope to look inside the chest and delicately detached the lung lesion from vital structures using special instruments.  The malformation is then cut into pieces so that it can be removed through one of the tiny incisions.  Usually, one entire lobe of the lung is removed (lobectomy).  The average recovery time in the hospital is about 4 days with minimal scarring (picture).  Children have normal lung function once they have fully recovered from surgery and have no restrictions on activities.  Recent studies have shown that children’s lungs can grow quite rapidly during early childhood to compensate for the missing tissue.

Can this happen again with another pregnancy?

Lung malformations are typically random (sporadic) birth defects and not associated with specific genetic syndromes or a significant risk for chromosomal anomalies. This is a rare condition that has no known genetic cause.  Your doctor and a genetic counselor will review the risk in your family.