Hemolytic disease of the newborn (HDN) or Alloimmunization

What is Hemolytic Disease of the Newborn (HDN)?

Hemolytic Disease of the Newborn (HDN) is also known by other names, including alloimmunization, isoimmunization, blood incompatibility, or blood sensitization. It can range from very mild, with minimal to no fetal effects, to very severe requiring fetal therapy. Everyone has unique proteins (antigens) on the surface of their red blood cells. When our bodies are exposed to red blood cells that do not match our own, the immune system produces additional proteins (antibodies) that will mark those foreign red blood cells for destruction. There are two ways to be exposed to blood that does not match our own: pregnancy or a blood transfusion. Once antibodies have been made, they are present for the rest of our life.

If a woman has made antibodies, either as a result of a prior pregnancy or blood transfusion, and she becomes pregnant, those antibodies can cross the placenta. If the fetus carries red blood cell proteins that are not compatible with maternal blood, the maternal antibodies may cause destruction of the fetal red blood cells. If enough fetal red blood cells are destroyed, fetal anemia will occur. Since HDN usually occurs during pregnancy, and less commonly through a blood transfusion, this rarely causes fetal anemia in a first pregnancy. However, once it appears, it tends to become more severe with each subsequent affected pregnancy.

The most common red blood cell incompatibility is due to the Rh protein (also called D protein). Rh disease is the only incompatibility that can be prevented through administration of a special treatment called “immune globulin” during times of potential exposure to prevent antibody formation. It is recommended that all Rh-negative women receive Rho(D) immune globulin during pregnancy and after delivery if there is a possibility that the father of the baby carries the Rh protein (is Rh positive). Other proteins that can cause HDN include Kell, Duffy, and Kidd, along with many others. These less common causes cannot be prevented with immune globulin.

How do I know if I have HDN?

It is routine to obtain a blood test called Type and Screen on every pregnant woman at the beginning of her pregnancy. This identifies your blood type and checks for the presence of maternal antibodies that could cross the placenta and affect the fetus. If antibodies are present (a “positive” antibody screen), further studies are needed to check the amount and type of antibodies present. The level of the antibodies is called a titer. When the titer reaches a level that could cause fetal anemia, it is called a critical titer. With the exception of Kell antibodies, we would not expect fetal anemia to occur without a critical titer.

What will happen during pregnancy?

When a pregnant patient has a positive antibody screen, it is important to determine if the fetal blood type is incompatible with maternal blood type. In some cases, testing the father’s blood will answer this question. For some of the incompatibilities, fetal blood type can be determined by drawing maternal blood. Other times, an amniocentesis (removal of amniotic fluid from the uterus through a needle procedure) may be required to determine if fetal blood is compatible with maternal blood. Once we determine if there is an incompatibility between the mother’s blood type and the fetus’s blood type (or if we are not sure), we follow the titers by testing maternal blood regularly throughout the pregnancy. If a critical titer is reached or if the antibody is to Kell antigens, the pregnancy is followed with weekly ultrasounds. Although some pregnancies will need weekly ultrasounds early in pregnancy, in most pregnancies this starts in the late second or early third trimesters.

At the time of ultrasounds, the blood flow to the fetal brain is measured through the peak systolic velocity (PSV) of the middle cerebral artery (MCA). Fetuses with anemia increase the flow of blood to the fetal brain. A specific ultrasound measurement of this blood flow correlates with the likelihood of fetal anemia and can determine the need for a fetal blood transfusion. When fetal anemia is very severe, it can lead to a condition called hydrops when swelling or excessive fluid can accumulate in the body. This fluid can be seen in the chest, belly, or skin. If untreated, hydrops can lead to stillbirth. The goal of intensive blood and ultrasound screening is to enable intervention for anemia before progression to hydrops.

What happens if there is fetal anemia?

If fetal anemia is suspected, we recommend sampling the baby’s blood through a procedure called cordocentesis. The cordocentesis is done under ultrasound guidance. A needle is placed into the fetal umbilical cord to sample the fetal blood, measure the blood count, and perform a blood transfusion if needed. Many fetuses will need more than one transfusion before the pregnancy is delivered. 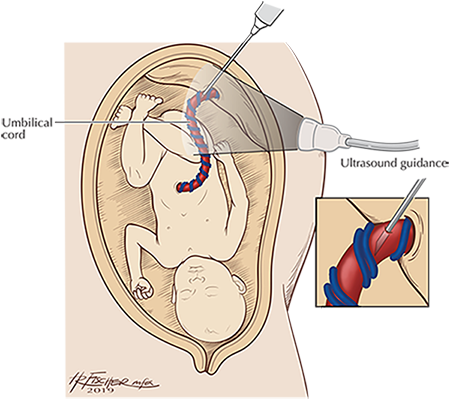 What to expect at birth?

Fetuses that require transfusions within the uterus usually deliver between 34 and 37 weeks’ gestational age. About half of these newborns will require a transfusion after birth, and almost all will require treatment for jaundice (when skin, and possibly the white of eyes, turn a yellow color due to buildup of bilirubin), usually with phototherapy (exposure to fluorescent light bulbs or other sources of light). The newborn will often need to be in the hospital longer than the mother. Some babies may be 4-6 months old before they completely recover the ability to make their own red blood cells, so they must be closely followed by an experienced pediatrician.