Corrected Transposition of the Great Arteries

What is corrected transposition of the great arteries?

Corrected transposition of the great arteries is a very rare heart defect in which the heart’s lower two pumping chambers, the ventricles, are reversed in their positions. It affects about 1 in 25,000 births and occurs equally in boys and girls.

Early in fetal life the heart first forms in the shape of a tube. This tube bends and folds in on itself, creating the four heart chambers and the four heart valves.  If the tube bends to the left instead of the right, the ventricles are reversed: the right ventricle is on the left (1) and the left ventricle is on the right (2). Two of the heart valves "follow " the ventricles so they are also reversed: the mitral valve (3) is on the right and the tricuspid valve (4) is on the left. Although the two heart valves and the two great arteries (the pulmonary artery (5) and the aorta (6) are transposed or exit from the "wrong" ventricle, the blood flows to the correct place because the ventricles are also reversed. That is why this heart defect is called "corrected" transposition.

While corrected transposition can occur by itself, most babies also have other heart defects. Other defects include ventricular septal defects (7) (seen in 60-80% of children), pulmonary stenosis (8) (seen in 30-50% of children), abnormal tricuspid valve (seen in up to 90% of children but may be very mild), and complete heart block (seen in 10% of children at birth, but can occur later, in up to 30% of older children). Dextrocardia, when the heart is positioned towards the right side of the chest instead of the left side, is seen in about 25% of these children. 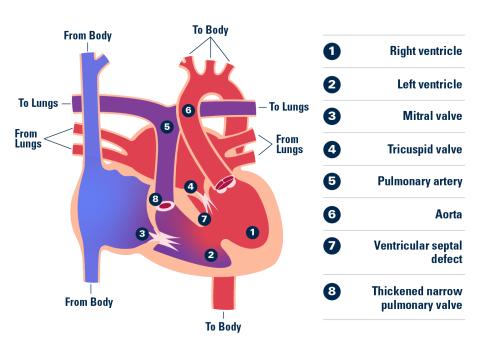 What are the effects of this defect on my child's health?

The reversal of the ventricles alone does not usually have an adverse effect during childhood. The early health effects of corrected transposition result from the other associated heart problems (listed above). If the baby has a large ventricular septal defect, symptoms of congestive heart failure may develop including rapid breathing, clammy sweating, poor feeding and slow growth. These symptoms are caused by too much blood flow to the lungs and are not usually seen until the baby is 6 to 8 weeks old. Often VSDs get smaller during the first year of life, so the first treatment tried is usually heart medicines. If these don’t control the symptoms, a heart operation to close the VSD may be needed.

If the child has pulmonary stenosis (narrowing of the area in and around the pulmonary valve) along with the VSD, this may protect the lungs from too much blood flow. However, if the pulmonary stenosis is too severe, it can cause its own problems. Under these conditions , since blood follows the path of least resistance, blue blood will flow right to left across the VSD (and not to the lungs) then out to the body causing the baby to look a little "blue." The medical term for this is cyanosis.

The effects of an abnormal tricuspid valve vary based on how much the valve leaks. Mild leakage is tolerated quite well and does not need to be treated. If the leakage is moderate to severe, the forward flow of blood out to the body is limited and symptoms of congestive heart failure occur including low energy levels, clammy sweating, fast breathing, poor appetite and poor growth. If the valve is too leaky, heart medicines may help but sometimes an operation to either repair or replace the valve is needed.

The reversed position of the ventricles and valves, alone, does not usually cause any health effects during childhood and, if there are no other heart problems present, a person may never even know that they have corrected transposition. It can, however, cause health problems later on, during adulthood. The ventricle that ended up on the left, and now has to do the job of pumping blood out to the body, was not really "made" to do this job. It is much more suited to pump blood to the lower pressure lung circuit. While the misplaced ventricle is able to do the extra work needed to pump blood out to the body for 20 or 30 years or more, it can then begin to weaken, leading to symptoms of congestive heart failure. Early symptoms can be treated quite well with heart medicines but, if these progress, in advanced stages the person may need a heart transplant.

How is this defect diagnosed?

Prenatal diagnosis: Corrected transposition can be diagnosed before birth by a fetal echocardiogram or heart ultrasound as early as 18 weeks into the pregnancy. This test is done when there is a family history of congenital heart disease or when a question is raised during a routine prenatal ultrasound. Fetal diagnosis of corrected transposition can be difficult unless there is also a VSD, pulmonary stenosis, or heart block.

Symptoms: If the only problem is the reversal in position of the ventricles, there are usually no symptoms until adulthood, and indeed, some people live an entire lifetime without ever knowing they have this "problem."  Most of the time, however, there are other heart problems, too. If there is a large VSD, and not much pulmonary stenosis, symptoms of congestive heart failure occur, usually when a baby is between 6 and 8 weeks of age. If there is a VSD and moderate to severe pulmonary stenosis, the child’s lips and nailbeds may look blue. The medical term for this is cyanosis. If heart block develops possible symptoms include low energy, dizziness, and/or fainting.

Physical findings: Most babies with corrected transposition are born at term and are a normal weight and length. Again, if the only problem is the reversal in position of the ventricles, the examination will be normal. If a VSD, pulmonary stenosis, and/or a leaky tricuspid valve is present, a heart murmur is heard. If there is congestive heart failure, there will be increased heart rate, increased breathing rate, and an enlarged liver. In an older child or adult there may also be swelling of the feet. If there is heart block, the child’s heart rate will be slower than normal.

Medical tests: The diagnosis is confirmed by an echocardiogram. An oxygen saturation test is used to measure the blood oxygen levels. Other tests include an electrocardiogram and chest x-ray.

How is the problem treated?

The treatment depends on the presence and severity of other associated heart problems. Congestive heart failure in children is usually first treated with medicines including digoxin and lasix. If these don’t help, and if there is a "fixable" heart defect such as a VSD and/or pulmonary stenosis, a heart operation may be needed. If the pulmonary stenosis is very severe, a conduit may be needed. A conduit is a tube that has a valve inside it. One end of the conduit is sewn into the right ventricle and the other end is sewn into the pulmonary artery. If the tricuspid valve is too leaky, an operation to repair or replace it may be necessary. If the valve is replaced, the child will need to be on blood thinning medicines. If there is heart block causing symptoms of fatigue, dizziness or fainting, a pacemaker is needed.

During adulthood, if congestive heart failure occurs because of longstanding overwork of the misplaced ventricle, the first line of treatment is also heart medicines. If the heart failure progresses so that medicines are no longer effective, a heart transplant may be needed.

In an effort to prevent later problem with congestive heart failure, an operation called the double-switch operation has been utilized. It is most often done during the first six months of life when there is a very leaky tricuspid valve and/or when the right ventricle has poor function right after birth. This operation involves both an arterial switch operation and an atrial switch operation (also called a Mustard or Senning operation). If there is pulmonary stenosis and a ventricular septal defect, a Rastelli and atrial switch operation are done. The goal is to rebuild the heart so that the ventricle on the left side now pumps to the lungs and the ventricle on the right side now pumps to the body. Early and mid-term outcome results suggest that this can be done safely with good result, but it has not been done long enough to know what the long-term results will be.

What are the long-term health issues for children with corrected transposition?

Given current improvement in medical and surgical treatments, the outlook for children with corrected transposition and associated heart problems is good. Long-term there may be problems with heart failure and abnormal heart rhythms, so ongoing follow-up by a heart specialist is needed. Careful consideration is needed for women with corrected transposition prior to pregnancy as congestive heart failure can result from the extra demands pregnancy places on the heart.

Exercise guidelines: An individual exercise program is best planned with the doctor so that all factors can be included. In general, there are few restrictions for children with corrected transposition, but this really depends on the presence and severity of other heart defects. If a pacemaker or valve replacement is needed, the child will usually be restricted from vigorous or competitive sports but can participate in non-contact recreational sports. The doctor may recommend that the child be able to self-limit their activity, which means that they should be allowed to rest whenever they feel the need to do so.

Take the next step

The Congenital Heart Center at University of Michigan Health C.S. Mott Children’s Hospital is a leader in treatment of corrected transposition of the great arteries. For more information on our programs and services, or to make an appointment, please call 734-764-5176.