What is an anomalous pulmonary venous return? 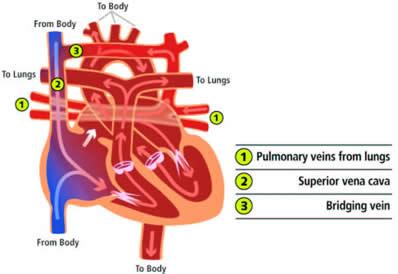 with the pulmonary veins (1) returning to the superior vena cava (2) via a bridging vein (3). Next most common is the "intra-cardiac type" 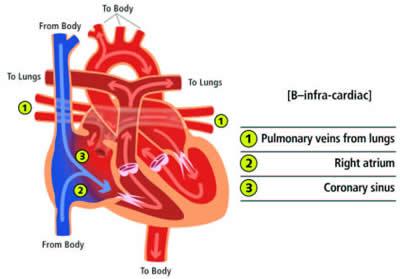 with the pulmonary veins (1)returning directly to the right atrium (2) via a tube-like structure called the coronary sinus (3). Least common is the "infra-cardiac type" 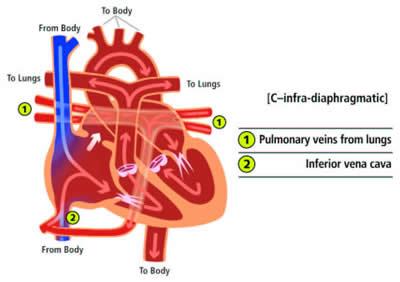 with the pulmonary veins (1) returning below the heart via the inferior vena cava (2). Sometimes, there is a mixed pattern with the veins returning to more than one abnormal site. In all types, when all four pulmonary veins are affected, there is also a hole, called an atrial septal defect (ASD), in the wall that separates the heart’s upper chambers. While APVR can be the only heart problem, it co-occurs with many complex heart defects.

How does this problem affect my child’s health?

The timing and degree of symptoms depend on the number of veins affected and whether there are any sites along the veins that are narrow blocking blood flow. When a child has anomalous pulmonary veins, red blood re-enters the venous system, that is, it goes right back to where it came from instead of flowing to the left heart where it can be pumped out to the body. As a result, there is too much blood flow to the lungs, and if all the veins are affected, there is no direct path for red blood to reach the body. In this case, the only way for any blood to reach the left heart is to flow from the right atrium across the atrial septal defect to the left atrium. In partial anomalous venous return (PAPVR), if only one vein is affected, there are usually no symptoms. If two veins from the same side are affected, symptoms of shortness of breath with exertion and low stamina may occur during childhood. The symptoms are usually mild and may not ever occur. However, during the adult years, too much blood flow to the lungs can lead to a serious problem called pulmonary artery hypertension. It is for this reason, that careful assessment by a specialist is needed to determine if surgery should be done. TAPVR is a serious problem that needs surgical repair soon after the diagnosis is made. While most babies with TAPVR have no symptoms at birth, about 50% develop symptoms during the first month of life, and almost all have symptoms by one year of age. Symptoms include congestive heart failure (rapid breathing, clammy sweating, low energy, irritability, poor feeding, and poor growth), and cyanosis, a bluish color of the lips and nailbeds that can be quite mild. Blockage of the veins can occur at any of the three abnormal sites and results in severe breathing problems. A small atrial septal defect results in early and severe symptoms as well.

How is this problem diagnosed?

Prenatal diagnosis: Anomalous pulmonary venous return can be diagnosed before birth by a fetal echocardiogram or heart ultrasound as early as 18 weeks into the pregnancy. This test is done when there is a family history of congenital heart disease or when a question is raised during a routine prenatal ultrasound. Symptoms: In most cases symptoms of congestive heart failure and/or cyanosis alerts parents or health care providers that the child may have a heart problem. These symptoms are most often noted during the first days or weeks of life. Cyanosis refers to a bluish color of the baby’s lips and nailbeds and occurs when blood oxygen levels are low. Symptoms of congestive heart failure in infants include rapid breathing, clammy sweating, poor feeding, and poor growth. Physical findings: Most babies with anomalous pulmonary venous return are born at term and are a normal weight and length (since before birth the baby’s oxygen comes from the mother). After birth, the baby’s lips and fingernails may look blue. A heart murmur is almost always heard. If congestive heart failure is present, the heart rate and breathing rate will be increased. Medical tests: The suspected diagnosis is confirmed by an echocardiogram. Sometimes, a heart catheterization is needed to determine the extent of the problem and/or to help the doctors plan the surgery. An oxygen saturation test is used to measure the blood oxygen levels. Other tests include an electrocardiogram and chest x-ray.

How is the problem treated?

TAPVR is a serious heart defect and left untreated, most children would not survive the first year of life. Treatment consists of a heart operation to re-route all of the pulmonary venous return to the left atrium. The ASD is also closed with a patch. The timing of surgery depends, in part, on whether or not obstruction is present. If it is, surgery is done on an urgent basis, otherwise, surgery is usually done early, within the first six months of life. Indications for surgical repair of PAPVR include excessive blood flow to the lungs as evidenced by symptoms and/or the results of heart tests done. What are the long-term health issues for these children? Long-term results are excellent for most children after following repair of APVR. Possible complications after surgery include obstruction at the site of the repair, development of pulmonary artery hypertension, and later (during adulthood), abnormal heart rhythms such as atrial flutter and sick sinus syndrome. SBE prophylaxis: An increased risk for subacute bacterial endocarditis (SBE) following repair of APVR may be present. This is an infection of the heart caused by bacteria in the blood stream. Children with heart defects are more prone to this problem because of the altered flow of blood through the heart. It can occur after dental work or medical procedures on the GI or respiratory tract because these procedures almost always result in some bacteria entering the blood. SBE can usually be prevented by taking an antibiotic before these procedures. If the surgery result is good, SBE may not be needed. Exercise guidelines: An individual exercise program is best planned with the doctor so that all factors can be included. In general, children with APVR (without other heart problems) do not have any exercise restrictions.