Tommy Schomaker was born with "half a heart," but after five surgeries and with the care and support of a diverse team of professionals, it's blue skies and yellow suns ahead. 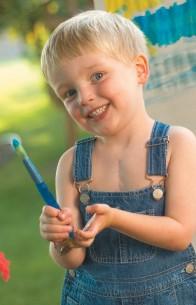 The children are referred to as having "half a heart." The correct term for their illness is hard for some people to remember: hypoplastic left heart syndrome - or HLHS. Colleen Schomaker and her family know all the words by heart.

"I was about 22 weeks pregnant," recalls Colleen. She had gone to her hospital for a routine ultrasound and found out that the baby she was carrying probably had HLHS, a congenital heart disease that would be fatal if left untreated. This path to discovery is a common occurrence for women carrying a baby with HLHS.

"We were told that the University of Michigan was one of only two institutions that could handle this problem," says Colleen..

"If Anyone Could Help Us, They Could"

Several weeks later, Colleen and her husband Mike met with cardiac surgeon Edward L. Bove, M.D. They discussed the results of their baby's echocardiogram, an ultrasound test used to examine the heart.

Bove confirmed that her baby did have HLHS, but "he filled us with a lot of hope," she says. "I was confident he could help our child."

Tommy was born December 10, 2000, and had his first heart surgery when he was eight days old. "You hand over your tiny baby for major surgery, and you pray," Colleen says. "By this time, I was confident that if anyone could help us, it would be Dr. Bove and the whole U-M team." That surgery was the first in a three-part procedure to correct HLHS. Tommy came through each stage beautifully.

It's common for children with HLHS also to need a valve repair or even a pacemaker. Tommy has had five surgeries now - the three-part Norwood procedure, a valve repair, and a valve replacement.

"We feel like we've utilized every 'feature' at U-M." says Colleen. "Chaplain Julie Nielsen from Pastoral Care, all the nurses on Mott 5E and ICU, the social worker Barb Shaltis, and so many more. They all know how to make a horrible situation endurable. And Tommy's cardiologists, Dr. Thomas Kulik and Dr. Carlen Gomez, provide a level of care and concern that is genuine," Colleen adds.

A special highlight for the Schomaker family was the Child Life Activity Centers. "We went to all of them," Colleen says, laughing. When he was a toddler, Tommy spent a lot of time in the Child Life rooms riding the strollers that were converted into cars while his chest tubes drained. As a four-year-old, his interests have turned to crafts. One of the projects Tommy treasured during his valve replacement this summer was a Hope Necklace he created that included a bead for each medical procedure. The Child Life areas were a boon for Tommy's brother Matthew and baby sister Genevieve. "The kids light up when they see a normal environment," says Colleen.

Colleen notes that having the Ronald McDonald House and Med Inn options simplified the logistics of caring for their other children. Med Inn is a 60-room hotel attached to the U-M Hospitals. "Mike commuted to work from Med Inn."

People often ask Colleen and Mike how they endure. Colleen says, "Our answer is always the same: with great professionals, doctors, a great institution and our faith in God. It's been such a long journey."

This mother's journey also has become a call to action. Michigan Visiting Nurse Nancy Cochran put Colleen in touch with the mothers of three other boys with HLHS in her area. They formed a playgroup that has grown to become the nonprofit organization Hearts of Hope of Southeast Michigan, a source of information and support for other parents of children with congenital heart defects.

Recently, Colleen met a mother whose sonogram revealed that her baby had HLHS. "I immediately told her about U-M and our group," Colleen says. "After we talked, she said, 'I now have hope.' "

Colleen concludes, "Hope is a wonderful thing to have. We look at this whole situation, and we look at Tommy, and we know that Tommy is a blessing."