Five years ago, Ariana was born missing four ribs and with abnormal vertebrae in her spine. This resulted in a 70 degree angle of scoliosis that impacted her breathing. Her parents weren’t sure if she would ever walk or if she would need a ventilator to breathe. That’s when they turned to U-M.

Ariana’s mother, Nicolette remembers, “Since Ariana was born, we’d seen multiple doctors. But it wasn’t until she was about a year old that a doctor told us we should go to Mott. And so we went there and told about this new device, the VEPTR, that would be the best route for her and her future.

The VEPTR is a state-of-the-art expandable, titanium rib that helps straighten out patients with severe spinal curvatures. Ariana was the first person in Michigan to have this procedure done.

“When Ariana came out of surgery, she was in the NICU for six days, but got better and better and stronger and stronger,” says Nicolette. “I was amazed by how straight she was. Before the VEPTR was put in, the left side of her chest was more sunken, but now it was filled. I was amazed. Her breathing improved.”

Every six months, Ariana travels to Mott for an adjustment to the VEPTR. So far, she has gone through nine of these procedures. These have become family events, with Mom, Dad, and Ariana’s twin sister joining her for support. As Ariana has come to understand what’s going to happen, she’s become more comfortable with every trip to the hospital. Ariana tells her parents that when she grows up, she wants to be a doctor so that she can help other kids the way the doctors at Mott have helped her.

Before she grows up and becomes a doctor, however, Ariana has a lot of important things to do. Stuff like running, jumping, bike riding, ice skating, catching toads, and playing soccer in her princess dress. Ariana has no problem keeping up with her sister and any of the kids at school. Says Nicolette, “I feel very proud and very happy to see my child be able to do the things other children can do; there are no limitations for her.” 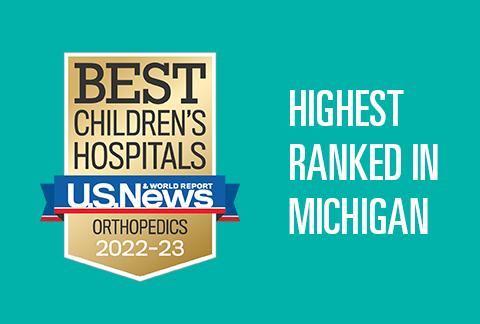